A long, long time ago, as if we were in that days of the dinosaurs lived two proud maunga above and below the pristine pacific ocean. These two maunga were  deeply in love as if they were Ranginui the sky father and Papatuanuku the earth mother. However, maungarei stood tall above the sea as if he was sir Edmund Hillary and Rangitoto below the deep blue sea as if she was the earth core. 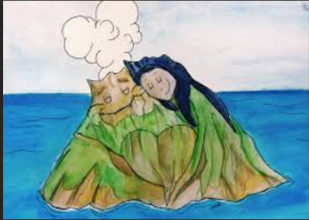 The Lava had a dream that he would found someone to love. He song with joyness and watch above the blue sky. He was as lonely as if he was a moon. Under the sea there was a Volcano that know that the song was meant for her. The volcano was old and he turn into a stone. One day the lady volcano blow up from under the sea, but the she was facing a different direction from him. She was as tall as a tree and happy as a sunflower. She was high in the sky looking above the other sea creatures . She was happy and started to sing the song that Lava was singing. Lava was growing older and older every day One day Lava blow up was face to face with someone who he had love. There were as a overjoy couple. The two Volcano lived happy ever after.

Email ThisBlogThis!Share to TwitterShare to FacebookShare to Pinterest
Labels: 2016, Writing